Join me as I build a
MASSIVE DRONER 2.5″
Micro Quadcopter

Ask questions, help me out when things go wrong. This is LIVE! 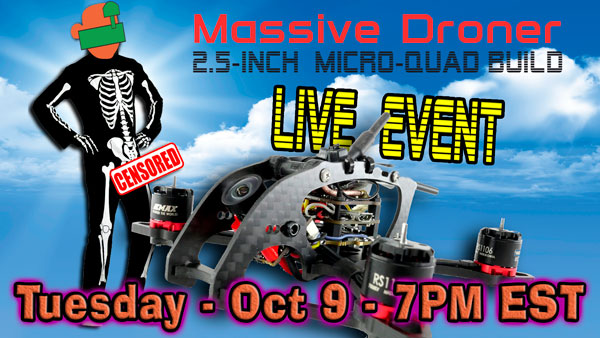 Massive Droner frame, or a VIFLY Finder Drone Buzzer,
courtesy of catalystmachineworks.com, & viflydrone.com.
You must be online at the end of the event to win.

I had just completed my Hellbender build when badness happened.

I decided to make an oldschool quadcopter using the Hellbender 204 V2 frame by Ready Made RC (RMRC). My plan was to use a mix of old favorite parts on this old “dead cat” frame with the newest DSHOT tech. Well planned 3-hour quadcopter build didn’t go seo well. Multiple part failures on the bench. Unbelievable! This what happens when you are working with older parts mixed with newer tech I guess. But it kinda goes both ways too. Enjoy the video below for the full story…

I had 4 part failures on the bench!

The flight controller’s serial USB connected fine to my computer, and I began programming in BetaFlight. Then it just locked out and never came back . This is a brand new/unused MotoLab Cyclone flight controller. So I had to order a Lumenier LUX V2 to replace it.

2nd failure:
I received four 30 Amp DSHOT ESC’s in my Done Drop Box and decided to use them. They failed to program. BLHeli Configurator (both 64bit and 32bit) failed to connect to them. All I could get was power on tones. It was like they had no pre-installed firmware. So I had to order four DYS XSD 30A V2 BLHeli-S ESC’s to replace them.

I was going to reuse my old Lemon RX DSMX receivers in this build. Bad move. Both my 2 receivers died. So I pulled a Spektrum Satellite receiver out of my Chameleon quad for this build.